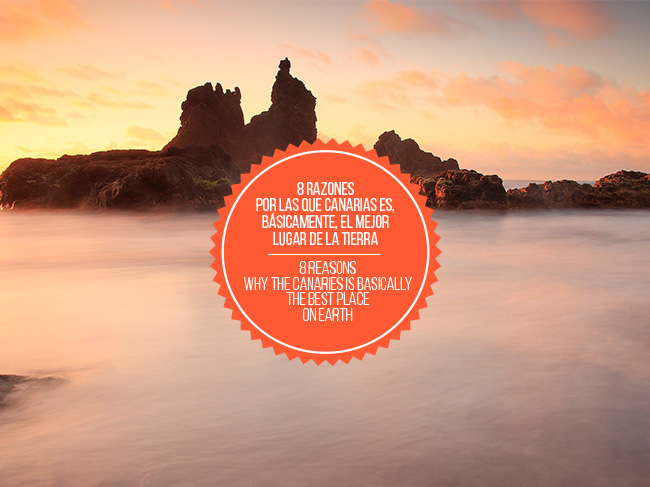 The Canary Islands are, for want of a better word, awesome. You can call us biased, because there’s a fair chance that we may well be, but that doesn’t mean we’re not right…and if you were in any doubt, here are just 8 reasons to support our argument that the Canaries is basically the best place on Earth:

Boasting over 300 days of sunshine a year (quite a lot more than the rest of Europe) the World Health Organisation has declared the climate as one of the healthiest in the world and it’s by far the number one reason people flock to the region. This magnificent climate encourages life outdoors, creating a more active and far more sociable way of life that captivates everyone who visits.

All you need to know to get an idea of the incredible selection of landscapes, native animal and plant species and spectacular subtropical forests is that of Spain’s 15 national parks, the Canary Islands are home to 4 of them. And of those 4, Teide on Tenerife is the most visited national park in the whole of Europe. With 546 endemic plant species and 141 protected nature areas to discover across the islands, stay a little longer if you can and visit them all!

Clear skies free of pollution and high altitudes make the Canaries one of the best places in the world for stargazing, where a selection of the world’s largest and best telescopes and a team of dedicated professionals try to unravel some of the countless mysteries found in space. Just ask former Queen guitarist Brian May – he studied part of his PHD in astrophysics here. Tenerife also hosts the Starmus International Festival, scheduled to take place again this year in June. The festival celebrates astronomy, space exploration, music and art and was set up by Garik Israelian and Brian May himself. Past events have seen participation from the likes of Stephen Hawking, Buzz Aldrin, Neil Armstrong and Alexei Leonov and this year’s promises to be the best yet.

The whistling language. Declared a “Masterpiece of the Oral and Intangible Heritage of Humanity” by UNESCO in 2009, on the island of La Gomera there is a traditional whistling language used to communicate across valleys. Called the siblo gomero (Gomeran whistle), workshops and demonstrations are still available today, offering a fascinating insight into this bizarre, yet highly practical, communication tool.

Foodies, take note: the Canaries have some seriously good culinary delights for you to discover, starting with the emblematic green and red mojo sauces. You’ll find them pretty much everywhere and, magically, they taste amazing on almost anything: bread, potatoes, cheese, fish, meat, vegetables, even on their own eaten by the spoonful. Try them once and you’ll be a fan, no doubt about it. The list of other foods worth sampling is long and includes papas arrugadas (salted potatoes), local goats’ cheese, potaje de berros (watercress soup), carne de cabra (goat meat), carne fiesta (seasoned pork), cochino negro (local specialty of black pig), barraquito (coffee with condensed milk, Liqueur 43, cinnamon and lemon) and some of the freshest fish and seafood imaginable. Forget any diet, life’s too short to miss out!

Engage in a spot of diving while you’re visiting the islands and you may get more than you bargained for by having a close encounter with the endangered loggerhead turtle, of one of the largest hard-shelled turtles in the world.

7. There’s something for everyone

Many places say they can offer something for all tastes and ages, but few really do. The Canaries, however, deliver the goods. Beach-loving surf fanatics can catch all the waves they could dream of in Fuerteventura or Tenerife. Nature-seeking ramblers who want to cut themselves off from literally everything will find solace and beauty in La Palma or El Hierro. Action lovers seeking an endless list of activities or party animals keen to drink and dance their week’s holiday away will discover plenty of opportunities in Gran Canaria or the south of Tenerife, while art lovers can enjoy César Manrique’s masterpieces in his native Lanzarote. Family fun, a couple’s retreat, an active break or relaxing escape, the Canaries really do offer almost everything you could wish for. Except skiing, of course. We said almost…

8. You can enjoy volcano-cooked food

For the barbecue to beat all barbecues, and possibly one of the most unique holiday experiences ever, head to Timanfaya National Park in Lanzarote and enjoy some meat or fish cooked on a massive grid over an open vent that goes right down into the volcano. Yes, seriously. Now if that isn’t something to bring up at a dinner party when you get back from your holidays, what is?