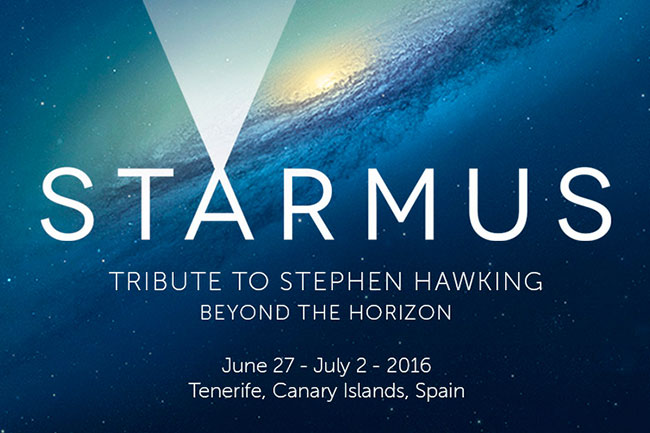 If you’ve never heard of the STARMUS festival, sadly you’re not alone. For some reason many people are still unaware of this unique, world-class event held in Tenerife, which is now in its third edition. Luckily, we are massive STARMUS fans, and as such are very proud to spread the word on one of the coolest, most original festivals in the world. Curious? Good. Read on, earthly friends…

Much has been written about the beautiful beaches, lush nature trails and delicious food in the Canary Islands, but we often overlook something that’s with us day and night no matter whereabouts we are: the sky. It’s no coincidence that the STARMUS international festival, dedicated to astronomy, is held in the Canaries – our archipelago is considered to be one of the best places in the entire world for stargazing. The festival represents the perfect symbiosis between astronomy, art and music, bringing together the brightest minds in these fields. Legendary astrophysicist Stephen Hawking and Brian May, the well-known Queen musician who is also an astrophysicist, are just two examples.

2016 marks the third edition of this prestigious festival, which is always held in Tenerife. Previous editions took place in 2011 and 2014. Inspired by the idea that nothing is impossible, the chosen theme this year is “Beyond the Horizon”, a tribute to the theoretical physicist Professor Stephen Hawking. In the words of the man himself: “STARMUS is a combination of science and rock music, and I love them both”. His career is as diverse as the contributions he has made in the world of science, so we’re eager to know the questions that will be put forward by the lucky winners of the “Ask Hawking” competition. In the run-up to this year’s event, anyone had the chance to submit questions to the Professor, who reviewed all the entries and has selected just three, which he will answer live on stage during the festival.

A ray of hope, a glimmer of inspiration

If we were to ask Garik Israelian, STARMUS founder and astrophysicist at the Canary Islands’ Institute of Astrophysics, about how the festival came into being and whether after the first edition he could have imagined a day when he was launching the third, his answer would more than likely be “no”. The idea came to him during a train ride from Moscow to St Petersburg with his friend Iñaki Soroa, who, on hearing Garik talk about music and astronomy suggested that he should try to pair the two up and see what came of it. After several failed attempts to organise a concert in the Roque de los Muchachos Observatory on the island of La Palma due to a lack of funding, and thanks to the support of Brian May and Alexei Leonov, Garik continued his mission to create a unique event, although it was put together without any major sponsors.

One of the things to have given the greatest satisfaction to the event’s creator is the fact that after STARMUS I not only did leading world scientists, astronauts and artists make contact with him, but they remain in contact today. Due to the success of that first edition, and despite finishing the festival thinking that he would never organise anything similar, support from the Cabildo de Tenerife and the Canary Islands’ Government convinced Garik that it was time to organise STARMUS II, which took place in 2014 and was a huge triumph.

This year’s festival will take place from June 27 to July 2 in Tenerife, however as the world’s largest telescope is found on the island of La Palma, there will also be a live broadcast from the Gran Telescopio Canarias, located in the Observatory of the Roque de los Muchachos, where a round table of 108 minutes will take place. The 2016 programme is available in full on the official website, www.STARMUS.com. Among the wide variety of events there will be conferences with different speakers, musical performances and art exhibitions.

Thanks to STARMUS III, no less than eleven Nobel Prize winners from different disciplines, international experts, NASA scientists and artists and writers from different countries will come together under one of the most spectacular skies on the planet: ours.

Fancy a bit of stargazing yourself?

If you do, we have just the experience for you…Sunset & Stars

Witness one of nature’s most beautiful offerings: sunset, from way above the clouds on Mount Teide. You didn’t realise you could do that? Ah, then read on. Because to be quite honest, watching the sun set from anywhere else afterwards is just not the same…

Enjoy the picturesque climb through some of Tenerife’s most beautiful countryside, stopping along the way to provide you with perfect photo opportunities as you pass through the clouds and reach the lower station of the cable car, situated in Tenerife’s fascinating Cañadas de Teide National Park – the most visited in Europe.

On your way up, watch the sun set from the lookout point in Chio, glass of champagne in hand, peace all around. If you’re lucky (and many people are, so your chances are quite good), as the sun goes down you will be able to see not only La Gomera but La Palma and even El Hierro, too.

Weather permitting, there’s also the option of going up by cable car to witness the experience from one of the lookout points up on Mount Teide. This is definitely the experience of a lifetime, as the views from above, with Teide’s gigantic shadow projected over the landscape is a vision that words cannot do justice to, and an image – and a memory – that will stay with you forever.

After sunset, your stomach will be more than ready for the feast that awaits you at the base station of the cable car, which includes many local specialities and, of course, local wine.

When dinner has finished, it’s time to witness another of nature’s most captivating shows: stargazing. Your guides will shed some light on the constellations, as you get to learn more about the skies above you, with the help of some long-range telescopes. The clear, unpolluted skies found in Teide National Park are world-famous, and enable us to see far more stars than we are normally able to. The Milky Way, the North Star and, depending on the time of year you visit, one of the many other famous constellations, all have their fascinating story to tell and the guides are very happy to share it.

Captivating, spiritual and unique, this is one experience we definitely recommend anyone does at least once, whether you’re a tourist or resident here in Tenerife.

For more information, please contact our Experience Centre on experiences@baobabsuites.com